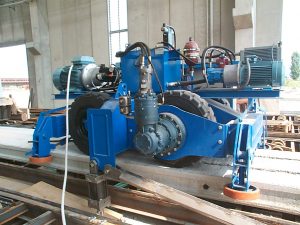 ICN is a major concrete prestressed beams manufacturer in Italy. Their new production unit in Belfiore has been designed according a new system that assures 30% more productivity. The slabs are casted in the first half of the plant. The special extrusion machines create monolithic beams 150 m long prestressed using high resistance steel wires. These beams are left 4 hours for a first ageing period. After that the prestressing wires are cut and the beams are carried in the second half of the plant to complete the ageing. A special system allows to separate beams from moulds that are sent back to be used again. At the end of the plant a semi-automatic cutting system allows to cut the beams at the desired length. Fazzini Meccanica has been the project manager of the plant and has designed several special machines needed. The most important are: